Hollywood rules the world of cinema. In second place, of course, is European cinema, which is a very different world with a unique film language. And, unfortunately, the viewer doesn't always dare to look into film territory outside of Hollywood. It's the same with Korean cinema. It seems to have been overlooked and for nothing, as it has given us so many cinematic masterpieces. The Korean film "Parasites" won four Oscar awards in 2019, including a nomination for best film. Bong Joon-ho created a film that captivated the world and which rediscovered the beauty of Korean cinema. Today we want to express our admiration and love for this culture, and we will start with the directorial style of Pong Joon-ho as he has many great pictures apart from "Parasites".

In the late 1980s society united and overthrew the dictatorship in South Korea. The dawn of the democratic era saw the birth of a perfect new cinema. Before then, under the dictatorship, cinema had been merely a propaganda tool, where every film went through a rigid filtering procedure. It was forbidden to show the negative side of life in the country and everything connected with it. But in 1987 this all changed and the road to cinema opened for young and ambitious filmmakers. Young filmmakers made political and social commentary on the history and present of South Korea through their works. Among these young authors was Bong Joon-ho. They were self-taught enthusiasts who had grown up under the influence of Western pop-culture broadcast through American radio and television stations, so films like "Parasite" or "Memories of Murder" were familiar to us - it was as if they looked familiar.  That's why Korean new authors, and Bong Joon-ho in particular, have produced films that are easy to understand in the West. From that, however, Korean new wave cinema could not be called secondary, because it did not borrow, but rather transformed elements that were already familiar to us.

Bong Joon-ho has been fascinated by infrared culture since he was a child, especially Hollywood, which had a great influence on absolutely every film of the director. What is interesting is the way Bong Joon-ho breaks traditional Hollywood genre conventions by incorporating a distinctly Korean character into his films. In "Parasite" we can see a distinctly Hollywood image, from which the viewer builds certain expectations of the film, but the further the film goes, the more we realise that this is an entirely new cinematic experience. Bong Joon-ho is the first Korean new wave to combine the formula of a successful Hollywood film with art, with a statement. This is the most intangible, but important feature of his directing style.

If we look at the director's second film, "Memories of a Murder" we can easily identify the detective story, which is inspired by both the film noir of the 1940s and David Fincher's reworking of the genre in Seven. SPOILERS  ALERT. In "Memories to Murder", as in "Seven", there is a major mystery - who the killer is - and there are two detectives through whose prism the story is told to us. However, like Fincher's picture, "Memories of a Murder" doesn't so much follow genre tropes as deconstruct them: in the finale of Seven the murderer himself comes to the heroes, showing the detectives his superiority, while in "Memories of a Murder" the murderer is not caught at all and the film ends with an open ending. David Fincher then borrows this final technique in his 2007 film "Zodiac".

Bong Joon-ho not only uses well-established genre conventions but also tries to experiment with them by adding Korean sensibility and character to his films. Therefore, when comparing "Seven" and "Memories of a Murder", there is no question "which is better?". They are fundamentally two different films, and it's simply not fair to confront them head-on. Where Fincher discusses uncompromising evil and redemption, Bong Joon-ho focuses on a critique of the social and political order in South Korea.

Here, it's important to touch on what kind of characters does Bong Joon-ho recreate in his film or, what does he want to say through them? Let's just say that Bong Joon-ho is a director who is not afraid to speak loudly and on difficult subjects. For example, his most famous movies are "Memories of Murder", "Mother" and "Parasite", which tackle issues of governmental corruption, traditional social rules and institutions, and social inequality. Bong Joon-ho takes his characters to extremes, which shows us, the viewers, the very essence of the problem. For instance, in the "Memories of Murder", one of the detectives is stubbornly stupid: he doesn't want to solve the crime, he just wants to get it over with and get out of the way. So he's willing to pin the crime on the first "convenient" suspect and seek a confession by force. This shows not only that the police are bogged down in bureaucracy, but also that they are totally unsure of how to solve such crimes. And this comment by Bong Joon-ho applies not only to the police but to the system as a whole: it is fragmented after civil wars and dictatorships, with everyone trying to get a bigger piece.

In the "Mother", Bong Joon-ho criticises the traditional Korean way of thinking that a woman should always follow her man, regardless of whether he is the father, the husband or the son. In the film, the mother who protects her son so much tries to rescue him from arrest for murder. The director takes this love to the point of madness, turning tradition into a wicked irony over morally obsolete values.

"Parasite" presents us with a family that is at the very bottom of society. They literally live like rats and in this film all the visual techniques work to show the difference between the poor and the rich. It is the social inequality and the fixation of the rich on being rich and the poor on being poor that lead to the grand finale of the film.

The director's visual style was primarily influenced by the legendary Akira Kurosawa. This influence is particularly evident in the film "Memories of Murder", where Bong Joon-ho quotes Kurosawa's compositional solutions.

His style is neat and precise. For the most part, his shots are static and completely devoid of human presence. Only in the most tense moments does the camera move into the hands of the man to convey the emotional intensity. The more space there is in the frame, the greater the volume: this way he can create picturesque and powerful shots even with just one person in the frame. Emptiness is volume. However, when more than one character is shown in the frame, Bong Joon-ho builds the composition from their arrangement - this is the biggest reference to Akira Kurosawa.

Also interesting is the visual storytelling in "Parasite", where Bong Joon-ho sets out to show social inequality primarily through visual language. The first shot of the film sets us in the right mood immediately: as soon as the title credits disappear, the camera immediately descends into the protagonists' dwelling. We see a cramped flat in the basement. They live like rats: they get poisoned by exhaust fumes, they get flooded first when it rains, etc. All this is filmed to show the cramped situation of the characters. They are shot from the top edge of the screen in their own house as if to make them appear even lower.

The rich family is filmed differently. It's a large and spacious mansion which is filmed in long general shots. This is how the director emphasises the essence of rich life: freedom and purity. They have more air and space. Their house never floods - it is always presented in the light of the sun. The minimalistic camerawork emphasises the interior of the Park family home: it is as neat as the clearly rehearsed long shots.

In general, Bong Joon-ho has implemented his most characteristic visual techniques in "Parasite". Firstly, the sloppy editing. The average frame in the film is 7.5 seconds, which is a lot. However, Bong Joon-ho is not oblivious to the rhythm and, of course, uses cheerful inserts with clip editing.

A couple more examples of how the director divides the characters on a visual level: we look down on some and vice versa on others. Exactly the same way Bong Joon-ho draws a literal class divide in the frame.

We hope we've succeeded in drawing your attention to Bong Joon-ho's work, because watching his films is a really wonderful experience, different from all the others. His films are so familiar, but so different from anything you might have seen before. We wish you had seen a couple of his works tonight because it's really cool. 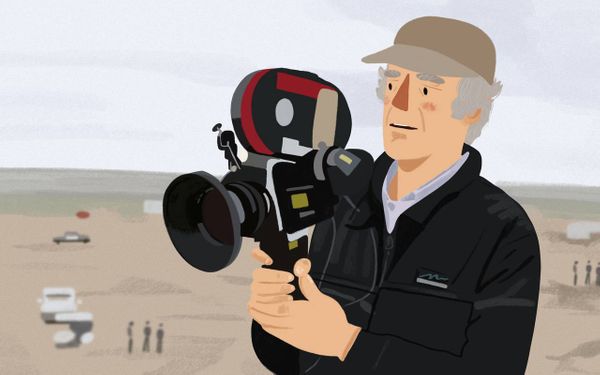 Today we would like to focus on the universal techniques of the film industry with which films are made. This blog will be devoted to the list of shot sizes and how they can be applied by different filmmakers.

Yes, yes, yes we've all just started to move on from the worldwide hit The "Squid Game", but that doesn't make the phenomenon of its popularity any less interesting. Today, we want to reflect on exactly why The "Squid Game" has become Netflix's most popular series.