Darren Aronofsky's movies are unlikely to be popular among the masses. Even many movie lovers are critical of his works and claim that his films are hard to watch. Aronofsky is engaged in the deconstruction of personality, his images deeply sink into the subconscious and haunt the entire film. However, the inconsistency of his work suggests that it is an art that has a particular message. Idea, theory, assumption, opinion. Art does not have to express what is convenient - and Aronofsky takes advantage of it. His audiovisual style is as shocking as the stories themselves. Moreover, it is his style that makes the narrative incredibly expressive. Therefore, today we will plunge into the methods of filming and editing of  the director in order to understand why someone loves him and someone hates him.

Aronofsky has two prestigious universities under his belt, one of which is Harvard, and the second is the American Film Institute. He spent almost 8 years studying film and directing. He directed his first film in 1990 as a term paper at Harvard. And while studying at the American Film Institute, he periodically participated in independent festivals, and in 1993 received a Master of Fine Arts degree.

All these academic achievements indicate that Aronovsky understands cinema and is in constant search of his own style. So in this "chapter", we will try to reveal some of his interesting findings.

Starting from the very first movie - "Pi" - Aronofsky has been developing his approach to movie-making. Especially, it is noticeable in the montage and if I name one particular movie, "Requiem for a Dream",  you would probably understand what is this type of editing. But if you haven't seen it,  you are welcome to watch the following video.

As you can see, Aronofsky uses rapid, dizzying editing. The director himself called it a "hip-hop" montage: close-ups and detailed shots are edited with great speed. This technique has become a kind of business card of the director. In "Pi" and "Requiem for a Dream" it is the main way to depict the inner state of the heroes, which is close to obsession. The editing takes the point of view of the heroes of the film, it only highlights what the protagonists are obsessed with. So in "Pi", it is math, and in "Requiem for a Dream" - drugs. Our gaze is lost, perception explodes from the number and rhythm of changing pictures. The director puts the viewer in the same state in which his characters are.

In many ways, it is this feature of the director's films that makes them difficult to watch. Obsession with details symbolises the inability to break free from the clutches of obsession and addiction. Discomfort, hopelessness, and claustrophobia - that's what the audience feels.

One more side of Aranofsky's montage is that he skips time. In other words, he manipulates time to isolate characters from the fiction world via such post-production features, as rapid and time-lapse. I guess, everyone understands what a time-lapse is, so I will reveal in more detail only the meaning of rapid.

Rapid is fast shooting, shooting in the range of 30 to 240 frames per second (fps), which allows on the stage of editing to slow down the image by up to 90%. Simply put, this is what we call slow motion in movies.

Thus, Aronofsky turns hours into minutes and moments into eternity. For example, the famous cleaning scene in "Requiem for a Dream" is only 25 seconds long, but in reality, we understand that at least a few hours have passed. He uses time-lapse to represent the significance of certain substances for the heroes, and their addiction.

Another remarkable technique in Aronofsky's editing is a split-screen image. The director is rather selective in observing the spatial rules of editing in his, probably, most famous film "Requiem for a Dream". In one scene, everything is done correctly, and in another, he neglects the classic scheme of editing dialogues by just adding both frames to the screen. This is how the director separates the characters, emphasizes their detachment from others. Sometimes Aronofsky uses a split-screen image in those scenes where the characters are literally lying on the same bed - this is such a strong technique.

And summing up, it is worth saying, of course, that Aronofsky's early work - "Pi" and "Requiem for a Dream" - was a new word in cinema, primarily visually. In Hollywood, there is a standard for editing films, which is called the deductive approach. Its essence lies in the fact that each scene should be set up with an establishing shot, which is usually a long shot, introducing the place where actions would take place. Aronofsky didn't follow this traditional structure, so his approach is inductive editing, meaning to start with a shot that doesn't respond to anything, that confuses. The simplest example is the sequence after the opening credits of "Requiem for a Dream".

The first work of the director is a riot of form. With the help of montage, Aronofsky tells his stories in a very expressive and unique way. Of course, in his later films, as he himself admitted, the director came to the conclusion that the audience does not care about the form - they want stories. However, this does not mean at all that his paintings became uninteresting - on the contrary, they are much better because Aronofsky never stood still. Therefore, his visual style is worth studying.

In this part we are going to take a look at how particularly his films are shot from the point of view of camerawork.

Usually, such a setup is supplemented by a wide-angled lens, which plunges us into the personal space of the character so that we empathize. If you want to discover how a particular lens affects the image, you could check our blog about lenses as an artist's instrument.

Wide-angle adds distortion in the form of elongated geometry. it confuses the viewer: people and objects seem equally far away and equally close.

Another feature of wide-angle is that it helps to achieve a freaking vibe. Especially, it is obvious while shooting on  ultra-wide lenses, i.e fish eye.

After Aronofsky has introduced us to the characters intimately enough and given us the opportunity to empathize with them, the director forces us to abstract, to look with an objective eye, which is expressed via top shots. In other words, these shots are projected as if "from God's point of view," which literally forces the viewer to evaluate the characters and their condition. It is an opportunity to feel like better human beings than the protagonists. The perspective of the top camera represents the power of our judging gaze.

From the point of working with the sound, Aranofsky is also a remarkable director. If you rewatch the fragment of  the "hip-hop" montage, you could catch yourself that sound design is a half (if not more) of the flashing effect. Aronofsky takes a lot of ordinary sounds and combines them into a "hip-hop" montage rhythm so a huge variety of sounds creates a cacophony, which also represents obsession.

From the very first film, Aronofsky has collaborated with one composer, Clint Mansell. He created all the most famous compositions, including the now-classic "Lux Aeterna", from the "Requiem for a dream". He combined motifs from classical requiems, electronic music, and intersound, resulting in the following masterpiece.

You can like or dislike Aronofsky's films, but you can't stay indifferent. I hope our little analysis of his work on the example of "Requiem for a Dream" has inspired you to familiarise yourself with the director's filmography. He has shown himself not only as a director of good visual taste but also as a master of storytelling. His plots are dramatic and his shooting is expressive. His films are contradictory and meaningful. I guess that's what makes an ordinary director  - a creator.

All we do is promote the love of art and try to inspire you to take your camera and make a short film. So if you wanna be like Darren Aronofsky, leave the boring pre-production routine to the Filmustage - automatic script breakdown - and focus on your creativity!

Don't forget to capture the best moments. Take care of yourself and see ya next week. 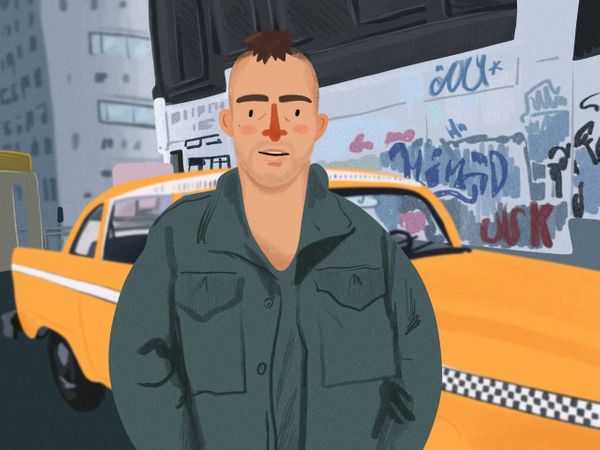 Martin Scorsese's name is one of the loudest names in cinema, so today we turn our attention to his directorial style and tricks.

Filmustage is an AI-based pre-production tool that helps screenwriters, filmmakers and studios save time and resources by optimizing internal processes. Today we are happy to announce the launch of Filmustage partnership with festivals and screenwriter`s contests.