The long-awaited adaptation of Frank Herbert's legendary novel "Dune" is raging in cinemas. There have been many attempts to adapt this science fiction epic and we've even written a separate blog about one of them - Сonquering the "Dune": a masterpiece that is not destined to appear - but this time Denis Villeneuve has taken on the film and so far it looks as if he's done his job admirably. However, the "Dune" isn't the only film to write Villeneuve's name in cinematic history - he already has many unique and strong works to his credit that deserve attention. Today we'll talk about Denis Villeneuve's outstanding directional style.

And for the biggest movie lovers, we have a Lovethatblog promo code for 1 free month.

A chameleon from the world of cinema

With his work, Villeneuve proves that he is not dependent on a particular genre, because in his filmography you will find a variety of films. From the documentary drama "Polytechnique", to the thriller "Prisoners" and the science fiction film "Blade Runner 2049" - and that's just three films! With his interest in many genres, Villeneuve tries to bring something completely new, or even to rethink some of them. His early films like "August 34th on Earth" are quite different from what we are used to seeing from the director. You could almost think they were directed by completely different filmmakers. "August 34nd on Earth" has a lot of handheld camera and spontaneous shooting techniques - overall, it's just a cool and stylishly made film in its genre. However, the evolution of Villeneuve's style already took place in his work on the documentary drama "Polytechnique", where he was able to get away from writing the script and devote himself entirely to directing. As a result, Villeneuve made a very convincing and frightening film that manages to show the horror of the tragic events in Montreal on December 6, 1989. Villeneuve left an idea of the rapid development of the plot, the handheld camera, the hyper violence on the screen - instead, he seemed to slow down the narrative, turning the film into an extended act of horror contemplation, which seems to work beautifully in this film. It is this principled directing technique that can be seen in every  Villeneuve film. Moreover, by slowing down the narrative, Villeneuve creates a very strong sense of suspense: the tension is present throughout the film.

What is the strength of Denis Villeneuve's directorial style?

It's impossible to remain indifferent to Denis Villeneuve's plots, because they revolve around an intriguing mystery which not only the protagonists, but also the spectator will have to solve. It may be a cheating trick, but Villeneuve pulls it off magnificently.

If we look at Villeneuve's cinematography from "Incendies", the single pattern of his plots becomes immediately apparent - namely mystery. Mystery as the main driver of the plot puts the characters in his films in a position where they are left only to be perplexed. The characters diligently seek answers and face difficult moral choices and obstacles. In Villeneuve's films, the border between black and white is torn by a terrible mystery that not only changes the characters, but also has a powerful effect on the audience. You can especially see this script trick in "Prisoners", "Blade Runner 2049" and "Enemy". The characters in Villeneuve's films are, strange as it may seem, ordinary people looking for answers.

Villeneuve is also known for his meditative audio-visual style, which immerses the viewer in a state of exhilarating contemplation. In order to realise his vision, Villeneuve delegates a great deal of responsibility to his creative collaborators: composers and cinematographers. Villeneuve is known, for example, for his collaboration with the excellent composer Johan Johannsson, who composed the soundtrack for "Prisoners", "Sicario" and "Arrival".

Also when we talk about great composers it's impossible to avoid mentioning Hans Zimmer who created the absolutely brilliant soundtrack for "Blade Runner 2049" and "Dune".

In Villeneuve's films, the music sets the mood and complements the story. But you'll never hear an uplifting or triumphant soundtrack in the director's films, because what Villeneuve needs is dark and underwhelming music, which helps keep the audience in suspense and confusion. The soundtrack reflects the worlds of his films: cold, unfriendly, frightening and meditative. On the level of feeling, Johannsson and Zimmer have created such strong soundtracks for Villeneuve that the director's films take on depth and dimension. This is partly why his films are so enjoyable to watch: viewers are swept up in the meditative nature of the images and soundtrack. Exactly the same happens to the film's characters: the soundtrack, reflecting the reality of Villeneuve's violent world, swallows up the characters.

The soundtrack is in perfect synergy with the picture of Villeneuve's films. Here Villeneuve has also distinguished himself by collaborating with notable filmmakers. "Prisoners", "Sicario" and "Blade Runner 2049" were shot by the legendary Roger Deakins, while "Arrival" was directed by Bradford Young, who subsequently received an Oscar nomination. Villeneuve's style encompasses very meditative static shots which are either shot on a tripod, or using camera dolly and other techniques to bring the image to maximum statics and stabilisation. The picture could be called as close to reality as possible, but the beauty lies namely in there: the visual storytelling is framed in linear perspective, which emphasises the volume of the shot as well as directs the viewer's eye towards the object or protagonist.

Another important element is the general plans. They are fundamentally important to Villeneuve because his cinematography seeks to portray scale and monumentality. It is with this idea that Villeneuve often places the little human in the general plan to show the scale and insignificance of human. As we've said before - the film swallows up the characters.

Light is also the key to the perfection of Denis Villeneuve's style. In many of his films, particularly "Prisoners", "Sicario" and "Blade Runner 2049", one can see sharply contrasting lighting choices. This contrast is necessary for Villeneuve to place his characters in shadow. In this way the shadow becomes a metaphorical symbol of uncertainty and mystery. Sometimes we can only see silhouettes - the characters are swallowed by darkness.

Of course, Villeneuve also uses other, classic, light solutions, but what also deserves attention is the work with colour. You'll definitely feel the sharp contrast between the films "Enemy" and "Prisoners": the achingly yellow against the cool blues and greys. This contrast suggests that Villeneuve resorts to absolutely every tool of cinematic language to create his cinematography.

But the visual style of Blade Runner 2049 took it to a whole new level. Firstly, Villeneuve maintained his commitment to contrasting images and the use of shadows. Secondly, a lot of neon, the symbol of cyberpunk, was used. And thirdly, an independent, active light has been created that changes during the scene itself.

Indeed, Denis Villeneuve is one of the most important directors of our time. His art of balancing between big-budget pictures and auteur cinema commands nothing less than respect. His films are, at the same time, a source of profound cinematic admiration, for they represent the height of directorial excellence. If you haven't seen his films, we can only be jealous. 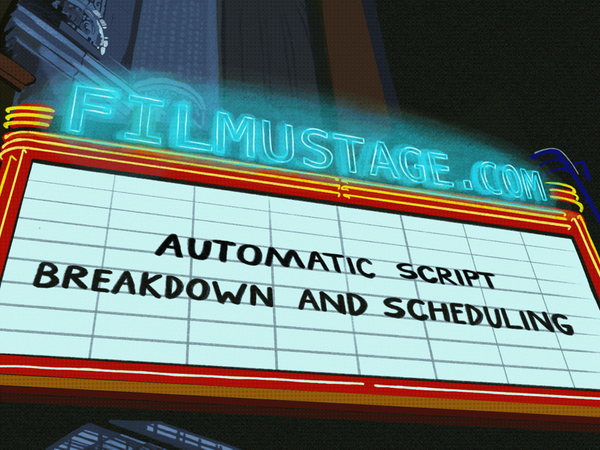 We have been working for a long time and now we are happy to announce the beta-testing of the new scheduling feature in the Filmustage software. Be one of the first to test the new functionality!